I am a complete noob when it comes to drones, as this is literally my first time owning one - so please pardon my ignorance on the subject!

As the list explains, the kit contains the following:

I am powering my kit with a 3 cell 75C 1300mAh battery. Since the kit does not contain a transmitter and a receiver, I bought FlySky FS-i6X transmitter to be used with a ParkFly FS-IA6 receiver. I have watched their instruction videos frame by frame and went over them one more time after finishing the installation just to make sure.

However, I am having a serious problem now. I got it working, the blades turn and all but as soon as it starts lifting off the ground, it starts wobbling wildly and usually flips to its side. I’ve recorded the following videos to explain it better. Please see them…

Another thing, I’ve come to realise that the installation video shows different connections (order) to the receiver than what I ended up doing, because when I did the order they show in the video, I get completely different behaviour from my sticks from the transmitter on the drone. Please see the image of my connection as well. 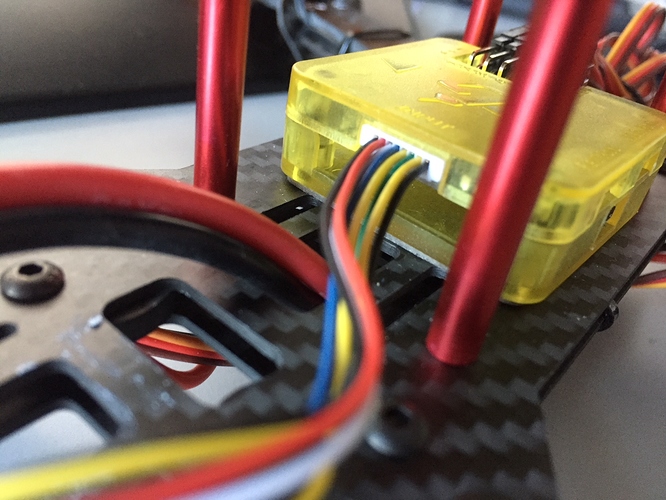 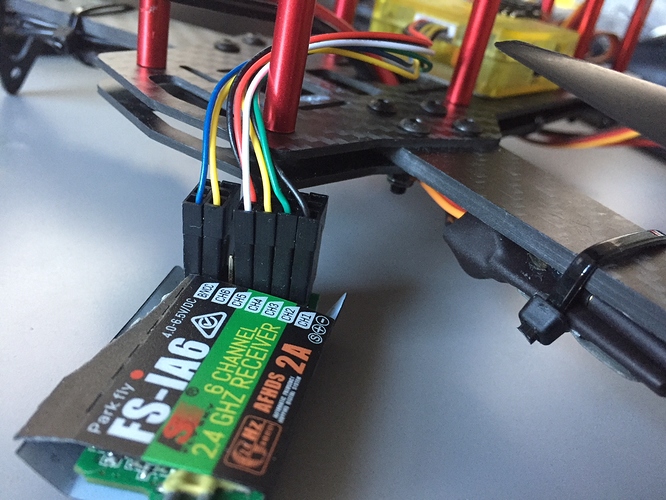 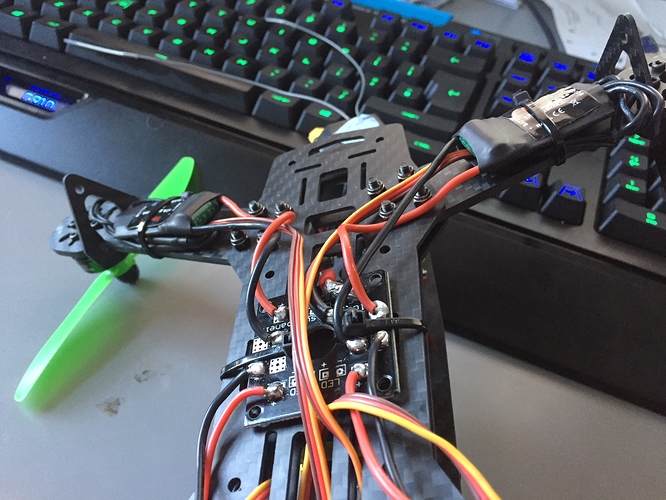 I also do not think it is a balance issue, because pretty much everything is centered and I could not feel any balance problems when I held the drone in my hands.

I am also sure that the motors are placed in correct places, as well as propellers go to the correct motors. I’ve triple checked that. Another thing I’ve done is to place the ESC’s under the arms, rather than top because the electric cables that comes from the power distro board was too short.

One final thing to mention is that I’ve updated the firmare of the CC3D and configured the FC and the controller inputs from LibrePilot. This includes calibrating the sensors. I’ve already broken 2 propellers whilst testing this, and I have no idea what I am doing wrong. Anyone has any ideas?

First off well done on your first build

I also do not think it is a balance issue, because pretty much everything is centered and I could not feel any balance problems when I held the drone in my hands.

Your correct balance is your problem.

I am also sure that the motors are placed in correct places, as well as propellers go to the correct motors.

From the videos I’m not sure you motors are spinning in the right directions… PLEASE take you props off for testing motor direction. 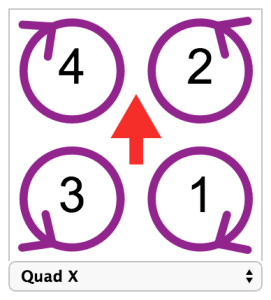 Your RX pin out doesn’t look right to me
@unmannedtech

The CC3D is a powerful and affordable flight controller that is very popular to use mainly on miniquad copters due to its small form factor. It has many advanced features that you can use if you add a GPS module, even waypoint based flight,. However, most users don’t bother with this for mini quadcopters and just want the basic setup. This post will provide some links and comments to some of the better CC3D setup guides that we have found on the internet. If you have made one, or know of a gr…

I dont think there is a Problem with your balancing…
To me it looks like your quadcopter starts to oszillate slowly…
That means there is probably no issue with the Gyro or a wrong spinning Motor as @DoomedFPV said.
However please check your Motor direction

Did you changed something on the Default PIDs?
If yes: Try lowering your I-Term.

Yeah, well done on your first build and for taking the time to test and ask for help:-)

If you have followed our guide exactly, then I think maybe you have missed the step where you need to adjust the flight controller orientation in the software. Because in the guide we mount it 90 degrees sideways to make the USB port easily accessible (looking back its not super clear).

YOu just need to make sure that when you move your quadcopter when it is connected to librepilot, the artificial horizon shows the correct movement, so if you pitch your quad down, librepilot reports it as tilting down. If it does not then you need to adjust the flight controller orientation in the attitude tab, to set yaw to be 90 or -90 (i cant remember off hand) 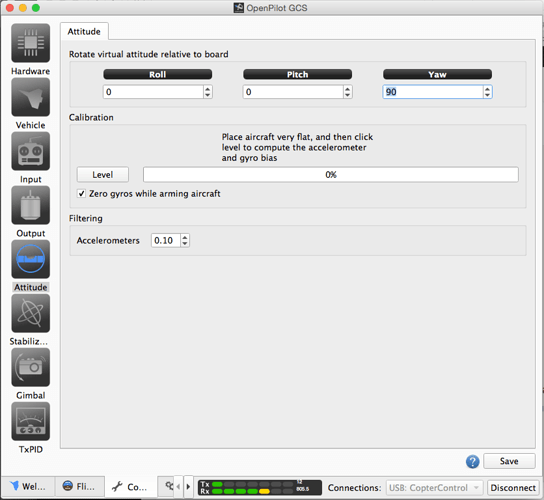 Let me know if that works, or if you still have some problems so we can get this fixed for you.

First of all, many thanks for the help! As @unmannedtech mentioned, I apparently missed setting the orientation of the CC3D. I also realised that, on my second try (second time I broke a propeller), it was actually placed wrong - so it was two things wrong at once… Now that I set the yaw to 90 degrees, it at least flies so yay!

I think I still need to discover and learn what is what and do some fine tuning via the software. I’ve also learned that it is easy to break blades

Its easy to brake everything.

But the difference is… you built it, you know how to rebuild it.