I got a hobbyking brushless gimbal and tarot zyz22 controller and after wiring it together, installing firmware, and messing around with motor and gimbal settings in the software, I still can’t get it to actually correct itself. When I push the camera to the side it just stays there, and the gimbal vibrates the whole time it’s on. I checked the pole count on the motors (12n14p) and matched that in the software (12), since I thought that might be the problem, but it wasn’t. I have played with the gain settings and changing them does absolutely nothing. Changing the motor power settings in the motor controller settings page also does nothing noticeable. Do you have any idea as to what the problem could be?

Hi
Have you checked the gyro unit position is correct and connected?
If you seperate the gyro from the gimbal frame and move it slowly do the gimbal motors move at all?
If not it looks like the controller has no position input.
Check wiring again etc…,
HTH
Cheers
Steve

Thanks for your response! I have set up the gyro like this, on top of the camera: 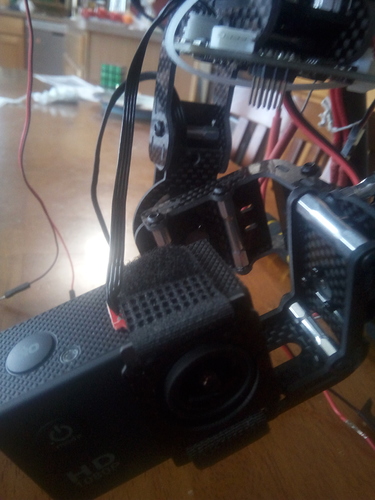 IMG_20171229_160204.jpg2448×3264 1.53 MB
When I separate the gyro from the camera and move it around, the camera moves, but not with much relation to the gyro’s movement. The camera moves when the gyro moves, and doesn’t move when the gyro is still, but seems pretty random. When I open the software, I can see the gyro’s position in the software, so I’m pretty sure the gyro isn’t entirely the problem. However, the gyro’s position seems to float around on its own when I l look at the software, so I have to calibrate it every 30 seconds if I want to test. It seems to float back and forth… I’m not sure what’s happening. Also, I don’t have the receiver plugged in FYI; my servo wires are too short. A longer one is arriving soon in the mail. Any ideas?
RobbieGM 2 January 2018 21:55 #4

Could somebody please help? I need to know what’s broken and if it’s possible to fix, I don’t want to buy both new motors and a new gimbal controller. Please don’t let this thread die before somebody helps…

Have you confirmed that the gyro is positioned correctly, so in the gimbal config software, when you tilt the gimbal down by hand, do you see the model moving in the software correctly? And are you using the suggested stock settings for the gimbal with the latest firmware? Once you have confirmed that, then you need to make sure the camera is balanced on your mount.

So I suggest you try to contact hobbyking for a replacement if you can.

Have you checked the settings on your transmitter?..

Sorry for the long wait (I’ve been busy) and thanks for your help. The gimbal tilt is reversed and the roll is correct. I can manually reverse the tilt so that’s ok. I’m using settings and firmware from http://ardupilot.org/copter/docs/common-tarot-gimbal.html. Another big problem is that the gyro in the interface seems to be moving in some random direction, slowly, at about 1 degree per second. Even so, the motors don’t try whatsoever to correct the gimbal, they just vibrate and do nothing, occasionally twitching around. Do you have any suggestions as to what’s broken and/or how to fix it? Thank you.