Hello guys, I own the mamba f405 mk2 and I have now been trying to get it in the air for about 5 days straight in spare time, trial and error and it is still not running.
I have wired up everything from esc to flight controller correctly (quadriple checked), but the problem persists in between receiver and controller(Tried both R9MM and RXSR). I have followed youtube videos on updating everything, updated my taranis x lite with latest firmware via open tx also updated the controller, R9M Lite module (ACCESS Firmware) and the receiver (ACCESS Firmware).
I have wired
Sbus to Sbus
v_in to Positive
Grnd to Grnd (also tried oscars 3 cable setup for sbus and telemetry through 1 wire)
Tried installing telemetry either on tx6 or tx 3 (second tx3 pad being free) and lastly on ppm pad after trying to create softserial in cli with given CLI commands from diatone, but that didn’t create a soft serial in the end (does not show up in ports), it goes like this:
resource PPM 1 NONE
resource ESCSERIAL 1 NONE
resource SERIAL_TX 1 NONE
resource SERIAL_TX 1 C09
Save

I have also followed Oscars cli commands to setup telemetry on F4 FC’s:
set serialrx_halfduplex = ON
set serialrx_inverted = ON
save

Tried halfduplex off and on, mixmatched these settings, with that in mind it is set to frsky fport in configuration (also tried with sbus cable soldered aswell as without telemetry cable)
Receiver will bind fine and I will get telemetry after discovering sensors, wont show in receiver tab in betaflight.

what binding lights do you get on your R9?

Any luck with this? I’m about to install mine and I’d like to learn from others here.

Im having this exact problem with the same board, did you figure it out?

No luck guys, only have got it setup in standard sbus mode. Without telemetry input, which was causing plenty of drops from the sky as I did not getting correct rssi signal data. If anyone has some luck with this, please update me on this.

Unfortunetly no, sbus is only way out I guess… that telemetry port is being wasted and we won’t be able to get correct signal data

I had someone suggest using F.Port to me. Have you tried it?

I have tried f.port. It did not work out for me either. Thought by now someone would have thought of something but I guess mamba likes making it hard for us, really is pain in the a**.

Normal green light, all bound. Wouldn’t recognise stick input. Tried sbus mode and works, just not what I’m after as there is bad signal data on my goggles aswell as no telemetry

What do you mean you tried SBUS mode and it works? What other mode are you trying then that doesn’t? Did you turn on telemetry in configuration tab as well as select SmartPort under Telemetry Output dropdown on the correct UART in ports tab? (which needs to be a separate UART from the one your SBUS RX is on)

If you are trying to use F.Port with an F4 FC, just save yourself some headache and stick with SBUS + S.Port if you have enough UARTs as FrSky’s inversion and un-inversion is a complete mess.

Also those wires are a fire hazard, please take time to re-solder them nicely before you burn your house down.

I have tried setting up telemetry on ports tab by enablaing SmartPort on the correct uart tab (and dropdown menu). It wouldn’t work (at some point I’d be able to get rssi and 1 other sensor through my taranis, thats about it)
Tried the Pos + Negative + Sbus and that worked, just problem being that I had incorrect rssi data in goggles.
From what you have said I figure to use the other pin on receiver? (S.port/F.port instead of inverted S.port)

Wires are looking much cleaner already, had some changes done after that pic.

From what you have said I figure to use the other pin on receiver? (S.port/F.port instead of inverted S.port)

No, your wiring on the TX side was definitely correct - “Inverted S.Port” is actually un-inverted because S.Port itself is inverted. As I said, FrSky is a mess. It should work if you wire everything up correctly and setup ports and configuration tab. No need to touch duplex settings. But from what you are saying it sounds like when your telemetry wire is corrected, you get no stick inputs? And when it’s not connected yo do get them?

Just to clear it up, I plug sbus in. I setup telemetry (like you suggested, to a tx pad and enable smartport). It works, all input. I am just not getting any telemetry data, no sensors can be detected through my controller (Taranis X Lite)

Hello, creating SoftSerial is by using Serial_tx 11 C09 , not Serial_tx 01. SoftSerial adress starts from 11…
There is no need to free Serial_tx 01 as you are using the ppm 01 source…
(Btw, your solder work i awful!! And dangerous…)

From what I remember (youtube video) is that serial tx 1 and 11 make no difference as to which one you use.
All cables patched up, did bother me too lol

I made this account just to tell you that i was having EXACT the same problem as you (same board, same RX).

Make sure you connect GND and 5V to the GND and 5V pads next to the SBUS pad = this solved my problem!!! I was feeding GND and 5V from another pad on the F405. I don’t think all de GND pads are 100% connected to each other. 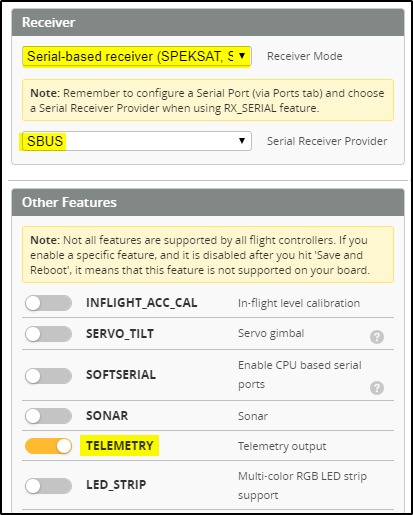 PS: I’v" flashed the R9M and R9MM with ACCST firmware (not ACCESS) because ACCESS works only with FrSky radios. I have an Radiomaster TX16S. I don’t think this is relevant, but worth mentioning.