Do you have a drone that follows a GPS route (similar to the Quanum on Hobby King!!).

Yes we do, I would recommend you consider something like the 3DR Solo as it has the most autonomous features. But you might also want to consider the Phantom 4 depending on your budget.

But if you let me know what exactly you want to do with your drone and what sort of price you are looking for I can make some suggestions specifically for you.

Hi - thanks again for comprehensive response. I’m just looking for something that can navigate around this area - about 25 acres. Just for fun - not business!

So are you just looking for a drone to take aerial photographs and videos of an area? Do you need this to be a orthographic map with lots of stitched photos together? Ie do you need to fly a grid pattern over the area? As that will have an influence on what drone you can use as it will need to fly for a longer time apposed to if you just want to fly around and look at random things in that area.

However if its just for general flying to get some aerial photos/videos then my suggestion would still be the Solo due to the fact that it has lots of autonomous features built in, including the ability to fly grid patterns for survey missions, However a cheaper all in one option is the DJI Phantom 3 Advanced and uses the same camera sensor as the phantom 4. Its also super easy to fly and had 25min flight time with around 5 Km range. It just doesnt have as many autonomous features as the 3DR Solo, but its a fully integrated package so you dont need to add your own gopro camera.

Hi
Does the solo require a camera?
Can you set it so that it can go around perimeter of land (by itself)?
Thanks
Miles

The solo does not include a camera, but any gopro 3/4 camera will work with it. You can change all the camera parameters on your gopro via the app when you are flying your solo, here are the recommended settings for a gopro 4 black. 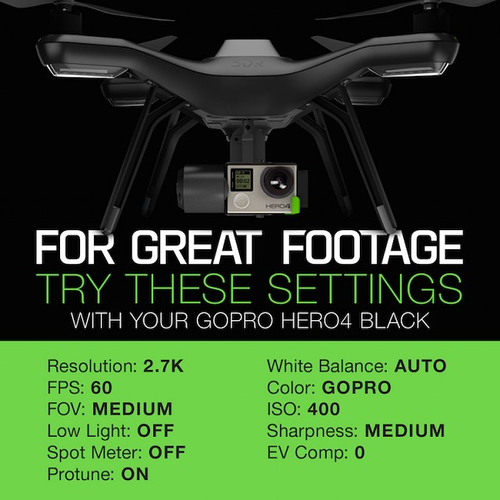 But here is the video