Diatone 150 - Problem - where to put the receiver?

Where is the best place to put the receiver on the Diatone 150 ?
It’s kind of small and I’m wondering if anyone has figured this out.

Hi, I assume you are talking about the tyrant 150?

If so I agree there is literally no space to mount a receiver especially if it’s a PWM one. What RX are you using? Hopefully it’s rather small and it will fit between the camera and the flight controller, possibly removing the casing and replacing with heatshrink will help. I know the XSR receiver fits there (just).

The other option is to remove the casing on your receiver and also the pin connectors and solder the ppm/sbus cables directly to it and the Heatshrink it onto the bottom of the frame.

Firstly - Your Blog is first Class !

I couldn’t figure out the SBUS - and became impatient… but I had to fly the Beast.

I’ve ordered a Tyrant 180 from you - as they are terrific value for money.

I have a Taranis X9D - which Rx would you recommend for the Naze32 Rev6 and smaller Quads Alex ? 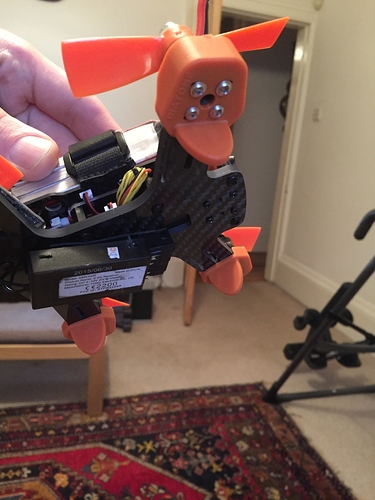 Thanks for your kind words

First post, but I thought that I’d respond, as I have just completed my Tyrant 150. I had the same problem initially and struggled to find much info on the 'net.

I replaced the lower to upper deck standoffs with some M3 20mm ones (eBay) - they are 5mm taller than the stock ones. I unwrapped an FrSky X4RSB and it fits between the FC and the upper deck. There’s not a lot of space left, but enough to get the battery straps in. An XSR would fit without removing the shrink wrap.

SBus and telemetry is available from both of those RXs. The wires are tiny and it was difficult (for me) to solder the RX-FC cable, but I managed it with a bit of care. You have to bridge the pins labelled 5 & 6 on the FC for telemetry. You can do that with solder, but not on the Naze32 in the Tyrant as there is a 10-way Molex already fitted to the board, so I just took the 5 & 6 wires from the connector and soldered both of them to the telemetry wire out of the X4R.

I also have some M3 6mm standoffs to replace the 10mm ones that the FC currently sits on - I believe that it will still give enough clearance for the components on the lower deck and it would give another 4mm of space above the FC. I haven’t tried this though and I may not, as I’ve already got the X4R installed where I want it.

I’ve put the first 4 batteries through the Tyrant this evening. It was just an LoS hover test, just to make sure that everything was working in flight - CleanFlight set up okay, the aux switches were working as expected and that telemetry were feeding back … and that nothing fell off