I was just soldering in the very last connection on my Matek board (for the camera) and a large blob of solder fell from the iron and on to the main IC on the motherboard.

F*** S*** and many other words of disparagement and annoyance.

I had installed the Chaos 30 amp ESCs you sent me and tried them out and compared to the elcheapo ones I had previously purchased they were magic. The motors all started at the same time and they would start at 1050 revs instead of 1100, 1180 and1210 rpm respectively.

I got most of the solder off immediately, but some must have bridged some of the connections on the IC as it will no longer boot. But I can’t see the bridges,even using fairly strong magnification.

There is a little good that has come out of it. I convinced my wife that I needed to buy a heat desolder gun and when I got that, I decided that I needed to actually see what had happened and so, today, I have ordered one of these digital microscopes

I would not normally have been able to swing this,but lately she has been talking about getting anothre type of microscope for herself so that she could look at botanical stuff in detail. The one she was looking at is about $1500, so that made it difficult for her to deny me a $180 one that took pictures and all sorts of other stuff.

So… Your Question is?

If you want to know, why your FC is not working; Probably because you threw solder onto it

It must have bridged something or heated something up real quick so it damaged something.
My advice would be rather buying a new FC instead of a desolder gun and a digital microscope

Yes, but then I would have an FC that didn’t work and I wouldn’t have a desoldering gun and a very nice digital microscope.
If I fail to repair the FC, I can still buy another one later. I consider it to be a win-win

I can understand your frustration! I find for situations like that solder wick works very well too. But having a microscope is also super useful. You may be able to still use your FC assuming nothing with power got shorted and once you have a good look with a microscope hopefully it’s just that some pins are still bridged!

Let us know how you get on!

I got the microscope today and I can see that there are two solder bridges on the IC. Possibly more.
I need to get some flux to help remove the excess solder

well spotted… I hope you get it repaired

Here are some pictures that I took of my very first and ham-fisted attempts to use a heat gun to desolder. 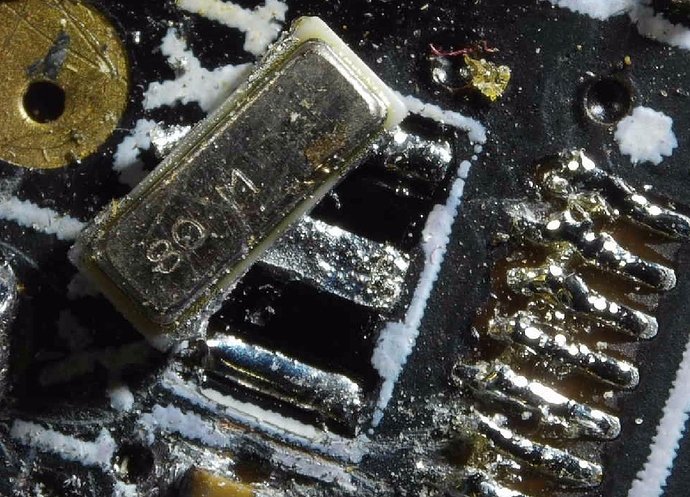 As you can see, my removal of the large IC also slid this resistor out of position. Ah well, more practice. 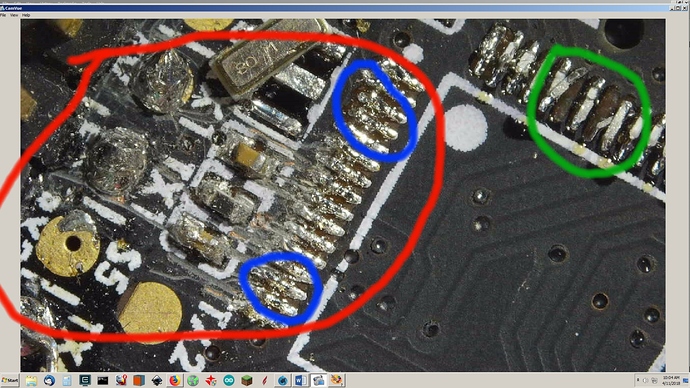 The larger area enclosed in red is where the initial blob fell.
The two blue areas show where there are solder bridges.
The green shows where two of the pads ‘seem’ to have moved.
I have a very fine dental pick that I will try to use to put all the parts back in place. It will be difficult, because although it looks very thin to my eyes, under the microscope it looks more like a baseball bat.
The 'Large" IC is 9.86mm square. That means that each of the solder pads is 0.29mm across.
To all you (older) pommies, that is: 0.29 millimeter = 0.011417322834646 inch or just over 1/100th of an inch.
The very tip of my very sharp pick is about 0.5mm diameter, so it will be tough going. 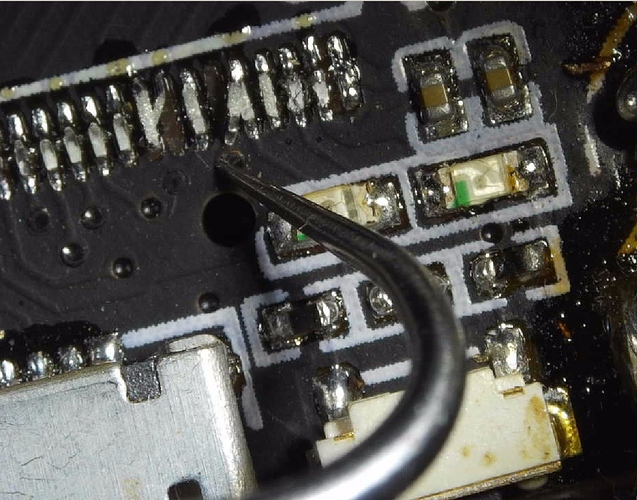 30 minutes later.
Oh no, all is lost.
I had successfully moved the resistor back into place and I noticed another pad that had moved, so I decided to move that back as well. 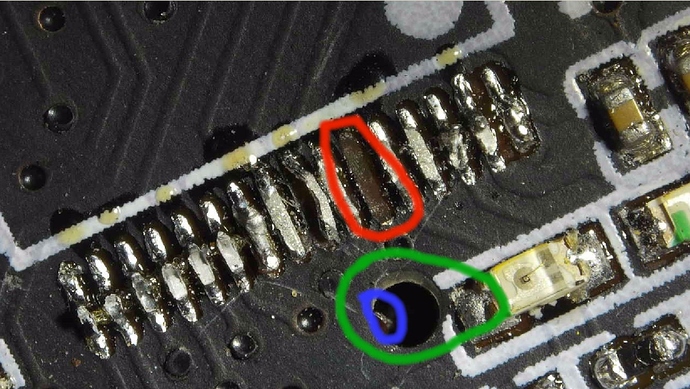 I think you killed it buddy

It’s repairable. The tool to use is a “hot air” system. Commercially when these are made in the factory the soldering is done in a reflow oven. The entire board is placed in a hot oven that melts all the solder, then surface tension causes the solder to go where it needs to go. Hot air can simulation that in small areas of the board…

You could with practice remove and reinstall any of the parts. But don’t practice on good parts. Maybe you have a dead computer or TV set, try cleaning a small PCB and placing the parts back, after a week yu get the hang of it. Hot air is now down to as low as $40 on eBay

Hi Chris
Did you notice that the track has fallen down the hole in the board and the size of that hole?
It is way beyond my meagre soldering skills.
I explained in the first (1/9) paragraph that I had managed to purchase a heated air de-soldering gun and it worked perfectly. Unfortunately, I didn’t.