So the Diatone GT M5 that I bought went up in flames (well ok one of the ESC’s did). I was too impatient to wait for Alex and team to send a replacement, so I bought some new ESC’s and that’s when the problems started. I’ve invested time in a fairly decent soldering iron with multiple tips, several hours worth of watching YouTube videos (I didn’t realise there was so much to soldering!) and thought I’d have a go at connecting the ESC’s to the flight controller. That’s when the problems started!

The solder on the board wouldn’t melt despite my hottest tip. The iron melted my solder quicker than you could say liquid metal, but the stuff on the board - nope! Even the de-soldering copper braiding didn’t work and just ended up going into the surface and then pulling into lots of fine copper filaments making a short circuiters dream! I even waited until the heat of the midday sun was out to give the soldering a helping hand! Nope, still no melting.

So is there some dark secret to de-soldering the solder from bought flight controllers, or do they use some dark Chinese secret for combining the solder into some super element that can never be melted, even on the surface of the sun?

I now have a baked F3S flight controller which seems to be totally overcooked. I’m hoping that the replacement doesn’t have pre-soldered holes and that I can use my own solder on it!

So hints and tips gratefully received

Try to add some solder to the tip of your Soldering Iron…
How hot was it? 450 °C ?
I know that it is a it too much but i always solder with 450°C because then the solder instantly melts and i have my soldering within two seconds done…

Another tip to get the chinese super material melted is magic:
You need to draw a Pentagram on the Ground, put Candles at each Corner, put the FC in the middle of the Pentagram.
When you start soldering while staying in the Pentagram everything should work.

(The Real Pro’s dont need the candles)
Should look something like this: 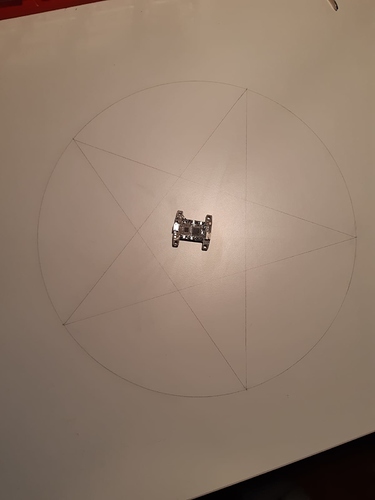 Thanks for the help. The iron is 60w and at max temperature - 480C.
I will try the pentagram next time. Maybe with time I’ll be able to do desoldering without the candles!
Incidentally, does it matter what kind of candles? Do I need to place the flight controller in the flame of the candle or anything?

with pads especially the gnd pads dont forget they are all connected. So when you heat one you heat them all, thats why some pads take longer to heat the others.

The trick with soldering is hot, but fast. heat it, solder it, get out.
They is skill involved and you will get better with pratice.

Thanks for those tips; I’ll give them a go on the next batch of soldering. Agree with hot n fast; I’ve burnt out a crossfire RX and F3S flight controller from not being able to go fast.