Before you read this, it might come across as me trying to defend the T18… but I just wanted to share my opinions about the 2.4Ghz range comparison between the two radios. As a shop we sell both radios so we have no financial motivation between trying to make you buy the T18 over the TX16s… both have their advantages and are great radios depending what you are after.

So I was slightly triggered when watching Bardwells comparison between the Tx16s and the T18 pro, as I feel it was inaccurate when it came to the range test. Overall I think both radios have their pros and cons, and I did agree with him that it feels like Jumper did rush the T18pro out abit too soon (ie the scroll wheel issue that is fixed by the new firmware release)

But that said, if anyone is still undecided between the two radios, and you are worried about the T18 Pro internal 2.4Ghz range, I think Bardwells video is not a very scientific/accurate test comparing the range. In his test, he stoped the test the second telemetry was lost (for about a second) on the T18… this distance was significantly less than the Tx16s. This is not a totally fair test as both devices were on teh ground where multi-pathing is super common and in his test, it was just the T18 that happened to have a blip due to multipath which could of just as easily happened to the TX16s. Its also important to note, on his video the telemetry recovered a second later in the same position.

A more fair/realistic comparison is one by Gal Kremer where he mounts his Frsky RXSR to his mavic drone, and tries to fly the same GPS guided rule on both flights. Both radios are fixed at the same position, and would you know it… the RSSI is similar for both radios. 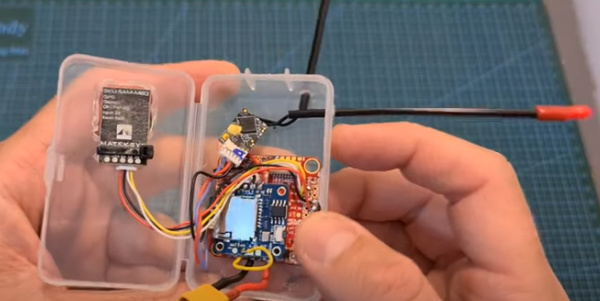 You can see the full video here where both radios have similar range and RSSI on 2.4Ghz

So basically if you like the idea of having both long range 868Mhz/915Mhz and 2.4Ghz on the same radio, but worried about the 2.4Ghz range, you dont really need to worry. Sure there are some advantages to having an external receiver (such as being able to use other antenna easily), but for normal flying you will not be at any disadvantage. Also you could argue the other side that having an external antenna over time can get damaged. Then if you plan to fly long range with the T18, you would obviously use the long range lower frequency module.

Basically both these radios are great. If I needed to make the choice I would probably go for the TX16s if I just wanted 2.4gHz and used crossfire for long range since its cheaper overall, especially if you already have crossfire. The Tx16s has a slightly more premium feel thanks to the metal scroll wheel. Whereas if you are happy with Frsky R9 (it has come a long way since its early days) or just like the ability to bind to just about any Rx there is in the market the T18 is the way to go… Plus I kind of prefer the carbon fiber look of the T18 over the plastic Tx16s. But who knows maybe Jumper will release their own R9 compatible receiver which would likely be much cheaper than crossfire/frksy receivers which could make the T18 very compelling…