Naze 32 versions explained and what to look out for

There are currently four core versions of the naze 32 flight controller. These are referred to as Acro, 6 DOF, 10 DOF, and Full. All the versions use the same basic hardware such as the STM32F103CBT6 CPI running at 72Mhz with 16Mb of flash memory. The sensors is where each of the versions differ as shown in the table below. The different sensors on the various versions mean that the boards can be manufactured more cheaply which appeals to certain applications.

Naze 32 6 DOF - this is the cheapest level naze 32 flight controller and does not include a magnetometer sensor or a barometer. Ideal for experianced FPV pilots who want a cheap but capable flight controller

Naze 32 Acro - this version adds a BMP280 barometer to the board which only increases the price by £1-2. However the added barometer means that the flight controller can perform altitude hold functions which is particularly useful for less experienced pilots.

Naze 32 10 DOF - This board includes both the BMP280 barometer and a HMC5833 compass sensor. Adding a compass sensor helps with getting better aircraft heading measurements while you are flying, but most importantly it allows you to add a GPS module to enable position hold flight mode with your drone.

Naze 32 Full - The full version is the same as the 10 DOF except that it uses much better quality sensors, the MS6511 barometer and MHC5983 compass are much more accurate. However these sensors cost more so the Naze 32 full flight controller is the most expensive option, but has the best performance.

All the revision 6 boards include a built in black box flight data recorder which is great. The 6 DOF, Acro and 10 DOF naze boards have 16Mbit onboard SPI flash. However the Full version includes 128Mbit onboard SPI flash so this just means you can store more flight logs on your full board.

The difference between the accuracy of the two barometer sensors are shown in the image below when the board is at rest. The MS6511 on the left shows a rather consistent altitude measurement, whereas the BMP280 sensor on the right jumps around quite a bit. So the MS6511 is clearly more accurate which will result in superior flight performance.

The Naze 32 flight controller has been around for a while now, and we are currently on revision 6 of the board. Each revision of the board makes some improvements to keep up to date with improvements in sensors, and other electronics. Other differences between new versions usually involve moving components around, or adding new pads for new functionality or better performance.

The naze 32 boards can run either baseflight or cleanflight firmware. Both are very similar and without going into too much details I tend to prefer using cleanflight since its updated more often as it has more active developers. We will write a full length article covering the differences between the two soon. But going forward it seems cleanflight is becoming more and more popular.

Due to the popularity of the Naze 32 flight controller there are several clones/variations based on the same platform. While most of these use the same/similar electronics and sensors some have been designed with certain objectives so might have extra or less functionality than the original naze 32 flight controllers. Its also worth noting that cleanflight supports all of these boards but the documentation might be slightly different for these compared to Naze32 documentation. 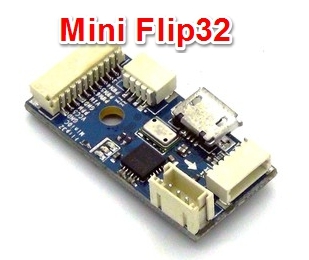 Popular Naze 32 based boards include:

There seems to be a discrepancy in the table and the text w.r.t. the Magnetometer on the 10 DOF. In the table it says the HMC5883 is used, in the text the HMC5833. One is obviously a typo, but, by ironic chance, as both of these devices exist, it is hard to tell which one is the correct one.

Hi, I allways tought that there was only two versions. Acro (6dof) and Full (10dof) and if I look for it on online stores they refer to 6dof as acro and 10dof as full. Is it right? There are 2 different 10dof and Acro with baro? Best regards!

Hi
The label ‘NAZE32’ has become a bit generic as there are now so many versions / manufacturers / clones in the marketplace.
Do not take anything for granted, check carefully the spec offered by the one you are thinking of buying.
Caveat Emptor

Hi Stevie,
I’m not buying, but writing an article about it and here was the only place I heard about these 4 versions. I know there are many versions, clones and variations but was talking specificaly about the information contained here.

Thanks for your reponse

What’s story with the latest naze 32 full version, cannot get them anywhere…
Cheers.

They are discontinued, and will no longer be supported from betaflight 3.2 onwards as it uses an F1 MCU. My suggestion if you want a decent, cheap board like the naze32 full check out the spf3 deluxe (we sell it at our shop)

Cheers
I will have a look.
Thanks
James