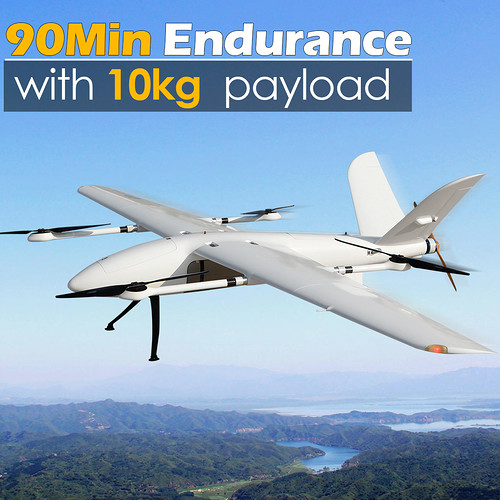 YANGDA Sky Whale heavy-lift electric VTOL drone is specially developed for LiDAR mapping and long-range cargo delivery & transport. It comes with four lift motors and one fixed-wing motor, which will allow the fixed-wing VTOL to ascend like a quadcopter. Once in the air, the aircraft transitions to horizontal flight as a push-prop fixed-wing.

Fast deploy
The fixed-wing UAV is adapting the most advanced quick-detach technology on both airframe and cable connector, making assembly and disassembly becomes super easy. In this case, the Sky Whale VTOL plane can be set up in 3 minutes by a single man.

Waterproof
Thanks to its anti-water design, the Sky Whale VTOL drone is waterproof and can reach an IP54 rating.