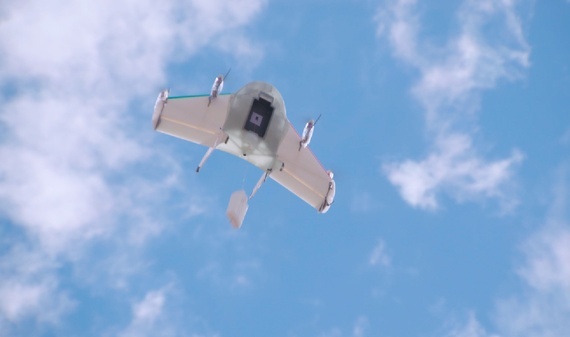 Just like amazon, google has also been looking into the idea of using drones to delivery parcels however they are taking a slightly differant approach of using fixed wing planes instead of multirotors. Or rather a hybrid of the two, it looks abit like the quadshot. Here is a video showing the drone delivery some dog snacks.

Overall I tend to think having the fixed wing/ hybrid concept is a little better as it will be able to travel larger distances more efficiently than a quadcopter. I also like their delivery system by dropping the parcel on a tether which is cooler unless the dog

gets abit to excited and decides its a game

Here is another cool video giving some more details of the project wing drone delivery platform from makerfair 2015.

The type of consumer qudacopters designed for aerial photography and FPV racing aren’t ideal for automated delivery–you can’t just tie a string to a Phantom. At Maker Faire, we learn about Google’s Project Wing prototype, which has a lightweight VTOL design that allows it to take off vertically and still fly long distances. It’s even been tested in the field!