A drone is an Unmanned Aircraft. Commonly referred to as unmanned aerial vehicles (UAVs) or Unmanned Aircraft Systems (UAS), this flying robot can be controlled remotely by a pilot or they can fly autonomously.

Drones can be used in various roles such as:

This shows how drones are revolutionizing the society with so many areas of application.

Drone technology was earlier available only to Militaries. This was primarily due to the prohibitive costs on account of the complexity in the design, and the expensive electronic/weapons payload.

Advances in Information and Communication Technologies have resulted in niche technologies. Drones now see widespread application in Retail Marketing, Crop Surveys, Disaster Relief and even Photography or Videography. Inevitably, these products find their way to terrorists and criminals.

The Drones are particularly effective due to its medium of operation – Air . Drones can carry payloads consisting of biological & chemical agents, explosives, weapons, drugs, contraband, etc. As mentioned earlier, it can also be used for surveillance – when done by an adversary, it becomes a threat to national security.

Anti-Drone Systems are designed to neutralize or suppress drone threat. 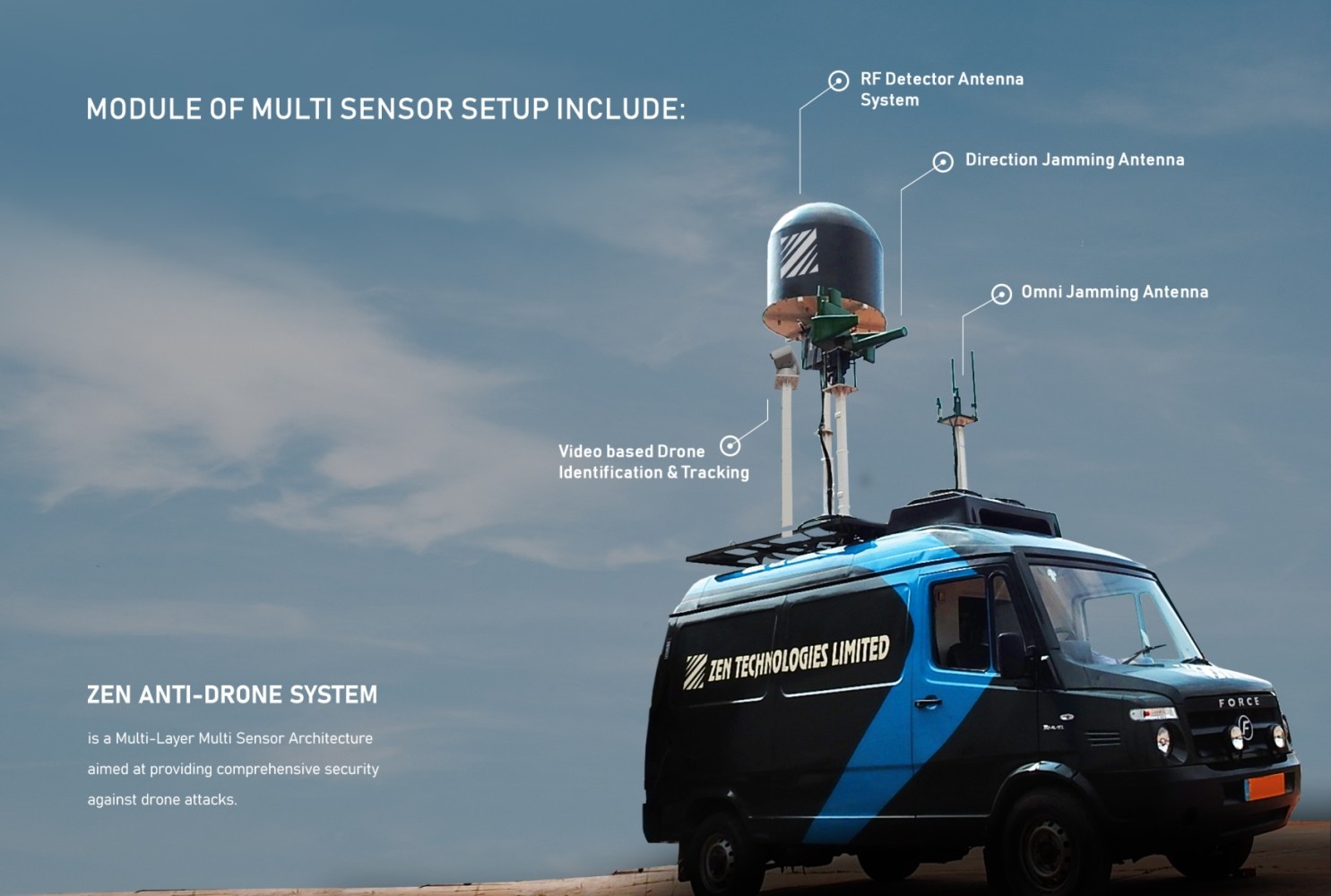 Classification of Drones based on Endurance

Did you know a drone can be as small as a house fly, as big as a fully grown 6 feet human, and even Bigger? In recent times, as the world is moving toward a more technologically advanced side, we have seen more and more ways a drone can be used, from delivering food to making unimaginable videos to fighting wars.

One factor that is important while designing a drone is the payload. Payload refers to the weight the specific drone can lift on top of its weight. For example, a delivery drone is made, and its payload is 25 kilograms; this means the drone can lift a package that is weighed up to 25 kilograms. Then, depending on the drone’s payload, the engine capacity and wingspan are designed.

The size of the drone is related to its payload and also the endurance of the drone. A usual micro Unmanned Aerial Vehicle (UAV) has an endurance of up to 30 minutes, an altitude ceiling of 330 meters, a wingspan of less than 150 mm, and a payload of 1.5 kgs. The most common micro UAV in the market are DJI Phantom 4 and Bebop which weigh less than 2 kgs. Micro UAVs like Black Hornet Nano are so small that they can fit in an adult’s hand and weigh 18 grams, including the batteries. Black Hornets Nano are manufactured by Prox Dynamics AS of Norway and are used by the best militaries in the world such as Armed Forces of India, of United States, United Kingdom, and more. 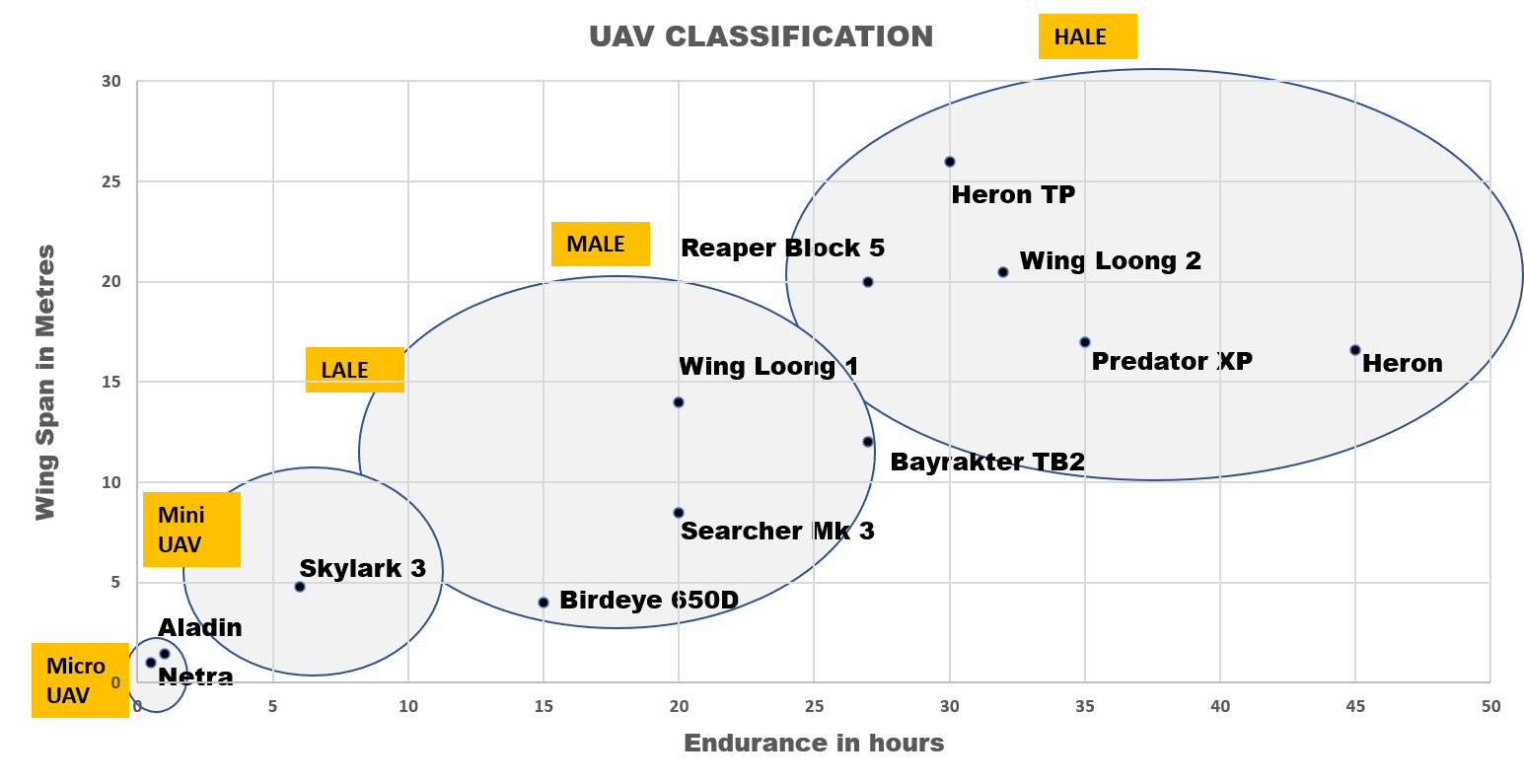 Other drone categories include Low Altitude Short Endurance (LASE), which can be launched using a sling or it can be man portable. LASE UAVs launched using man portable configuration have an endurance of 45 minutes to 2 hours; on the other hand, sling-launched variants have an endurance of up to 6 hours, with a range of 100 kms, and have an altitude ceiling of 4,000m. In addition, they have a payload of approximately 10 kilograms.

There are two more categories in which drones can be classified Medium Altitude Long Endurance (MALE) and High Altitude Long Endurance (HALE). An example of a MALE UAV is The Turkish Bayrakter which was used in the Azerbaijan-Armenia war and Russia-Ukraine war. MALE UAVs typically have a range of 180-200 kms with an endurance of 12 hours long. They can operate at the height of 6,000m Altitude. They have a payload of 50 kgs, almost how much a bag of cement weighs. HALE has an impressive altitude ceiling of 10,000m. An example of a HALE UAV is the HALE Reaper Block 5 manufactured by General Atomics Aeronautical Ltd, which operates at 50,000 feet and has an engine endurance of 27 hours. The payload of this beast is 1710 kgs. It is valued at USD79.42 million, which equates to rupees ₹3,278,883,174.00. Recently France, who already had 6 HALE Reaper block 5, has signed a contract for another 6 HALE reaper B 5.

To summarize, we as a society are technologically so advanced that we possess the capability to create a UAV that can fit in a human’s hand to a UAV that is almost as big as a human or even as big as a training aircraft, while not forgetting the applications of the UAV. It makes us wonder if our engineers can topple their own expectations and create even more fascinating UAVs.